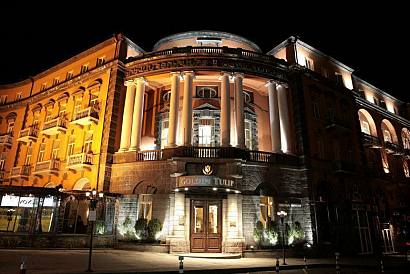 Grand Hotel Yerevan is located in the very heart of the city, just a few hundred meters from the main square and promises to combine today's comfort and luxury with the elegance, style and nobility of the past centuries.
Grand Hotel Yerevan has a history and tradition of many years. It was the first hotel in Yerevan and was built in 1926-28 by the famous architect N. Buniatian. The hotel was called originally "Intourist".
Grand Hotel Yerevan is situated on Abovian Street, one of the most famous and most important streets of the capital, right on the square that has recently been named after the well-known singer Charle Aznavour.
Many famous cultural and political figures such as writer Arshak Chopanian, Russian poet Ossip Mandelshtam, well-known Armenian film director Sergey Paragianov lived in the.
In 1999 Grand Hotel Yerevan was renovated luxuriously by Italian construction company "RENCO S.P.A." The hotel is still keeping its ''mystery'' and radiating traditions of Armenian and Italian culture. Nowadays Grand Hotel Yerevan is a favorite place of both natives and incoming guests: businessmen, cultural, political figures and tourists.
Grand Hotel Yerevan is one of the architectural monuments of Armenia and is most interesting with its unique architectural internal and external solutions.
The hotel has 104 guestrooms of various categories equipped with minibars, air conditioning system, safes, satellite television. Non-smoking rooms upon request.
Hotel Chain: «Small Luxury Hotels of the World» from February 2017.
The hotel offers facilities, including open-air swimming pool, fitness center, SPA center as well as restaurants and bar. Hotel offers 4 meeting rooms with all the necessary audio-visual equipments.

Select type and time of reservation