Shrouded in mystery, the Temple of Garni offers a rare glimpse into pre-Christian Caucasia 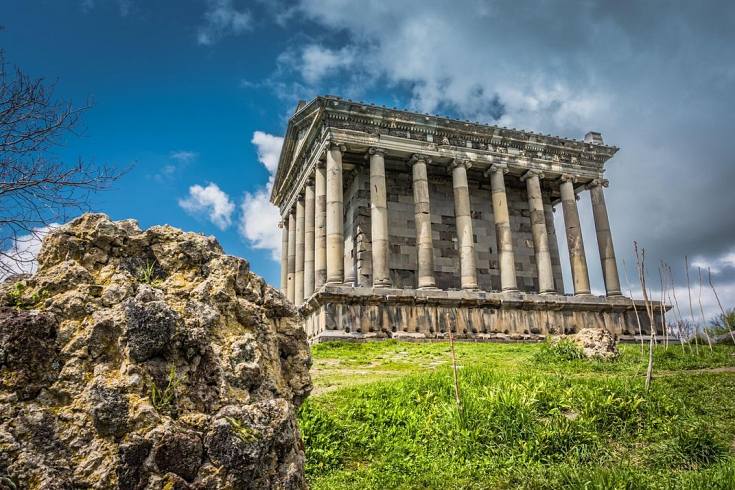 Church fatigue?” my tour guide asked rhetorically, noticing my dragging feet and glazed-over eyes. I’d never heard the term, but after eight hours of monastery-hopping under the Armenian sun, it certainly resonated. It was only 3 o’clock, and we’d already hit St. Echmiadzin, Khor Virap, Geghard and Noravank, four spectacular sites that were starting to blur together in a fever dream of conical roofs, cruciform floor plans and dizzying frescoes. “Final stretch,” he said, patting me on the back, “and don’t worry, this place is nothing like the others.”

He was right. Here, 2,500 miles from Rome and 1,500 miles from Athens in a remote corner of the South Caucasus, sits an unmistakably Hellenic temple of colossal proportions—the only remaining standing structure of its kind in the former Soviet Union. I gazed, mouth agape, at its geometrically impeccable colonnade, reminiscent of the Maison Carrée in Nîmes or the Parthenon on the Athenian Acropolis. Beneath it, double-height stairs wrapped around the entire foundation, and above it, triangular pediments rested on its capitals. Pedestals displaying carvings of Atlas, the Greek sky-bearing Titan, flanked the entrance. My mind was racing: How did a Greco-Roman architectural masterpiece end up in Armenia, and what was its purpose?

The leading theory is that the temple was erected in 77 AD during the reign of Tiridates I, who, 11 years prior, had been crowned by the Roman emperor Nero. The story goes that as a token of goodwill, Nero sent the Armenian monarch back east with a cadre of Roman craftsman and a generous sum of money, resources that were used to build the fortified city of Garni and its central temple, a shrine to the ancient Armenian sun god Mihr.

This hypothesis hinges on a Greek inscription found near the site that mentions the completion of an important construction project in 77 AD. But some scholars, like Elizabeth Fagan, an assistant history professor at Truman State University, are hesitant to jump to conclusions. “There’s no compelling reason to connect the Greek inscription to the temple,” she said. “The text in question seems to allude to the construction of a residential building, not a holy site.”

Another band of academics maintains that Garni isn’t a temple at all but rather the tomb of one of the Romanized Armenian kings of the 2nd century, based on architectural similarities between Garni and contemporaneous mausoleums in Asia Minor. (Fagan isn’t sold on this theory, either, since tombs—even prominent ones, according to her—were customarily erected outside the city walls; Garni Temple was built well within them. She does pin the construction in this timeframe, though, the 2nd or 3rd century, based on the structure’s stylistic elements and drilling techniques.)

If everyone can agree on one thing, it’s that Garni Temple is pre-Christian, making its existence today somewhat miraculous: When Armenia adopted Christianity as its national religion in the 4th century—one of the first nations in the world to officially do so—King Tiridates III’s regime razed virtually all of the pagan temples. It remains a mystery why the temple at Garni survived.

It almost didn’t, for more natural reasons. In 1679, a violent earthquake toppled the temple and reduced it to rubble, and for three centuries the structure sat in utter disrepair. It was only in 1975—following the imprimatur of the Soviet Union—that the edifice was fully, meticulously restored to its former glory. It may seem odd that the U.S.S.R. would fund the restoration of a supposedly holy structure, given their crackdown on religion generally, but as Christina Maranci, professor of Armenian art and architecture at Tufts University, explained, “The Soviet aesthetic often prized classical forms, so Garni Temple was an inspirational place.” While most of the stones you see today are original, any missing fragments were purposely replaced with blank gray rock, so as to differentiate between the new and old materials.

Today Garni Temple welcomes some 136,000 visitors each year, and a handful of those are Armenian Neopagans, who call the site their spiritual capital. Armenian Neopaganism is a relatively new grassroots religious movement that aims to reclaim the pre-Christian Armenian faith. “The movement officially began with the first celebration of the birth of Vahagn, the ancient Armenian god of fire, at Garni Temple in 1991,” said Yulia Antonyan, assistant professor of the Department of Cultural Studies at the Yerevan State University. “So that tells you how important this site is to their identity,” she added. “To this day, Armenian Neopagans congregate there on their holidays to practice ceremonial dancing and ritual prayer and sacrifice—though a new law forbids them from actually slaughtering animals on-site.” Tour the site on Navasard (August 11), the Neopagan New Year, or Khaghoghorhnek, their Day of the Dead, and you’ll likely happen upon a congregation of praying Neopagans. (Visitors can observe these rituals but aren’t generally welcome to participate in them.)

Regardless of how visitors choose to experience Garni Temple today—as a primeval shrine to pagan gods or simply an enigmatic archaeological site—this ancient structure, with its many untold secrets, is sure to spur everyone’s imagination long into the future.