Monastery Noravank is situated among the red rocks on a ledge winding gorge. It was founded in the twelfth century on the site of the ancient buildings.

Translated from armenian Noravank means "New Monastery". It was built in the 13th century. It is situated among the red rocks. Noravank Monastery is known for its two-story church of St. Astvatsatsin. Narrow stone steps on the facade of the church leads to the second floor of the church. Medieval Armenian architects and sculptors to show all his skill and talent at decorating the walls of the church of St. Astvatsatsin. Every detail so well thought out that fascinates even the worldly-wise traveler. All the magic of a trip to Noravank begins at the fork in the road to Noravank. The narrow road leading to the monastery, compressed beautiful cliffs on both sides. And after a few minutes you find yourself on the rock where the complex. Being high above the gorge, you will feel in heaven as if to lend a hand if you can touch the sky.

Noravank complex includes the church of St. Astvatsatsin amazingly decorated with crosses on the walls, the church of St. Karapet with a vivid depiction of God the Father and ornaments Vordan cochineal red or red on the ceiling. Cochineal Red plays a crucial role in the history and culture of Armenia. Here you can admire the khachkar Momik wizard.

Noravank enveloped in a beautiful and at the same time sad legend of a love story. It is said that the famous master Momik fell in love with the daughter of the prince. She also fell in love with him. Then the prince invited the master to her and promised that if he built a beautiful monastery alone, without help, it will allow Momik marry his daughter. Then began the construction of the master and finished all even before the agreed deadline. Prince learned of this and sent his servant to the monastery. And then master the servant dropped from the dome of the monastery and killed him. And the last stone, which he cultivated, became his tomb. And so because of the great love of the master and the princess, the world can enjoy this incredible beauty of the monastery. 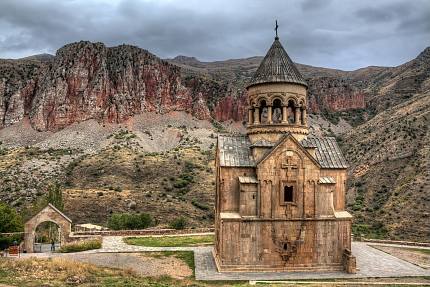 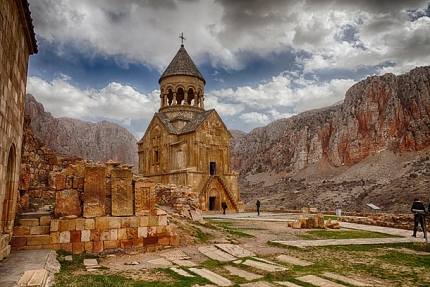 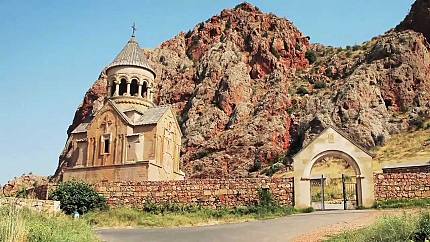