The temple of Garni is located near the village, situated on a plateau among farm fields, orchards and vineyards

To the south-east of Yerevan, in the territory of the Abovyan district, above the gorge of the river Azat is eponymous castle.

The temple of Garni is located near the village, situated on a plateau among farm fields, orchards and vineyards. Fortress has a shape of an irregular triangle, with the sharp end facing the gorge. In the northern part of the promontory adjacent to the plateau, out of, the centuries-old alluvial earth strata excavations uncovered a massive steppe 14th strong rectangular towers. From the south and south-east of the fortress is protected by steep 80 - 100-meter cliffs overhanging the river.

Excavations Garni, which are conducted here regularly since 1949, gave an interesting material. It was found that the neighborhoods of this village due to Gurni fruitfulness of local land, water and an abundance of natural protection have been inhabited since ancient times.

The temple collapsed in 1679 due to the earthquake, but has been impeccably renovated in 1970, with preserved fragments used in the place and missing made anew. Garni Temple was built from basalt. On the podium erected wall of the main room and 24 columns of the portico. By the main entrance is a wide staircase.

Behind the temple area narrows and ends abruptly to the river. Hence the 100-meter height offers a wonderful view of the gorge of the Azat river, close to where the left looms pink rocky spurs Geghama ridge. 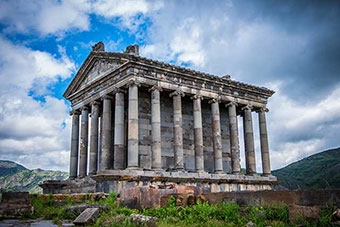 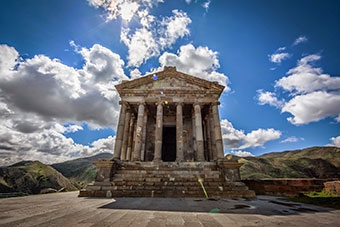 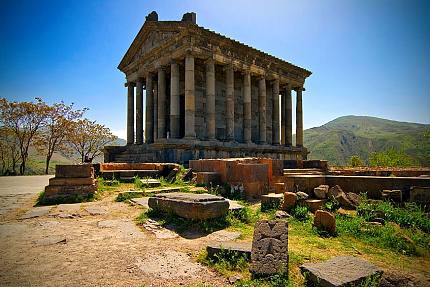 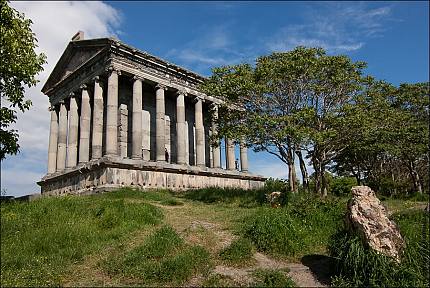