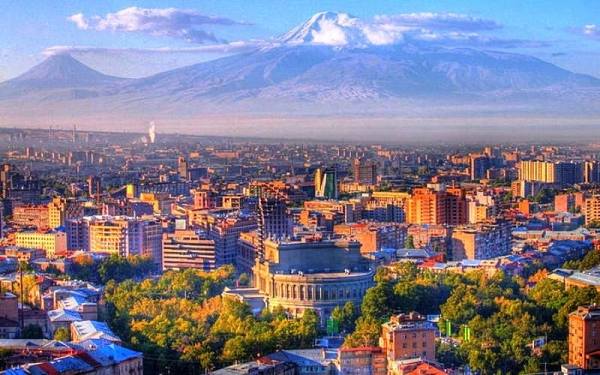 Visiting Matenadaran – depository of ancient manuscripts, guarded by the statue of primordial alphabet - giver St. Mashtots. There are conservation rooms for the 17000 manuscripts in dozen languages.
Excursion to Erebuni fortress, founded by Argishti I King of Urartu in 782 BC, and Erebuni museum which is housed in the ancient citadel of Erebuni, the predecessor of the present-day Yerevan. Its display includes bronze and iron tools, earthenware, weapons, ornaments and other articles made by Urartu craftsmen. All these have been discovered during excavations of the ancient town-fortress.
Visiting the Memorial in Tsitsernakaberd dedicated to the victims of the Genocide in 1915.
Visiting the State History Museum in Republic Square. The important archaeological collection from Stone Age through Medieval periods are shown there. One should note a Latin inscription from Ejmiatsin attesting to the presence of a Roman garrison. There are some interesting models of early modern Yerevan and other historical exhibits.
Visiting the traditional Armenian market. Free time for shopping.

Visiting the Hellenistic fortress of Garni, which has a different charm in each new season. The Greco-Roman-style temple was build around 77 AD under King Trdat I. This is the only architectural monument saved up to our days from Hellenistic period. The Temple is dedicated to the God of Sun Mher. It collapsed from the earthquake in 1679 and was reconstructed in 1970-s.
Route towards Geghardavank, a supremely beautiful architectural monument built in the 13th century. “Geghard” means “spear-headed metal object” in Armenian, housed in Geghard, with which Christ was wounded in the side. Now it is saved in the Ejmiatsin treasury.
Trip to famous Lake Sevan (1900m above see level), that enters recorded history with the Urartians. King Rusa I conquered Sevan basin and made it the eastern frontier of the kingdom of Urartu sometime around the 720 BC. A number of boundary markers of Artashes I written in Aramaic, the Middle Eastern lingua franca, show the presence of the Artashesid dynasty in Hellenistic times. In the medieval times, Gegharkunik was dominated by the Dopian clan.
Visiting Sevanavank, a construction, sponsored by Princess Mariam Bagratuni, which is a vivid example of an important religious regional school, under the guidance of the future Armenian katholikos Mashtots Ervandatsi.
Visiting Haghartsin (11th c.), one of the most beautiful monuments of medieval architecture. There is an ancient nut tree nearby (said to be 1000 years old), shading a fine viewpoint of various remains of graves with typical Armenian ornaments, including “royal” graves of the Bagratuni family. There is a belief that one can have his dreams come true by passing through a huge hole right in the famous tree.
Back to Yerevan.

Pilgrimage to the first official Christian Church in the world and the seat of the Supreme Patriarch – Catholicos of all Armenians. Excursions to the ancient temple of St. Hripsime. Tour around Ejmiatsin town, visiting the Cathedral – religious centre of all Armenians, and the Cathedral Museum. On the back way observing the ruins of Zvartnots (7th c.). The temple collapsed from the earthquake in the 10th c.
Visiting Brandy Factory. You will discover what the living legend of the Armenian Brandy is. During the tour: distillation workshop, barrel-making workshop, aging workshop, bottling workshop, museum (history and evolution of the company), video hall (15 minutes of a screen-tour in the world of legendary Armenian Brandy), bar tasting, shop (an exclusive chance to buy genuine brandy). Free time for shopping.

Excursion to the South part of Armenia, Province of Vayots Dzor. See the historic monastery Khor Virap with an overwhelming view of Biblical Mount Ararat. This is the site where St. Gregory the Illuminator was imprisoned by an Armenian king for preaching Christianity. See famous Monastery Complex of Noravank, one of the most splendid monuments of medieval Armenia, which was built in the Province of Vayots Dzor in the 13th-15th centuries.
Back to Yerevan.