Tour to the oldest cities in the world - Yerevan, trip to Garni and Geghard. Visiting the city Ashtar and Lori region. Dilijan and Karahunj. Travel to Armavir region.

Excursion to Erebuni fortress, founded by Argishti I King of Urartu in 782 BC, and Erebuni museum which is housed in the ancient citadel of Erebuni, the predecessor of the present-day Yerevan. Its display includes bronze and iron tools, earthenware, weapons, ornaments and other articles made by Urartu craftsmen. All these have been discovered during excavations of the ancient town-fortress.
Visiting Matenadaran – depository of ancient manuscripts guarded by the statue of primordial alphabet - giver St. Mashtots. There are conservation rooms for the 17000 manuscripts in dozen languages.
Visiting the Memorial in Tsitsernakaberd dedicated to the victims of the Genocide in 1915.
Visiting one of the best museums in Yerevan, the would-be final home of famed Armenian filmmaker Sergei Parajanov(1924-1990). He won international fame with “Shadows of forgotten Ancestors” and “The Color of Pomegranates”. 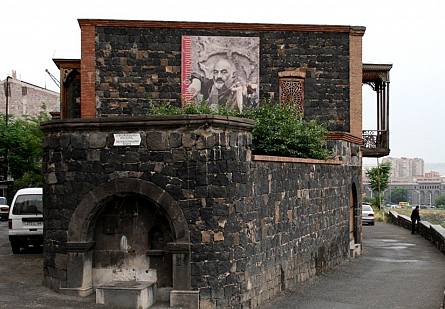 Visiting National Picture Gallery. It has a huge collection of Armenian, Russian and European works, some of the latter copies or else spoils of World War II divided among the various Soviet republics.
Visiting the State History Museum in Republic Square. The important archeological collection from Stone Age through Medieval periods are shown there. There are some interesting models of early modern Yerevan and other historical exhibits.
Visiting traditional Armenian market. Free time for shopping.
Visiting Vernisage – a place where one can buy Armenian souvenirs. Free time for shopping. 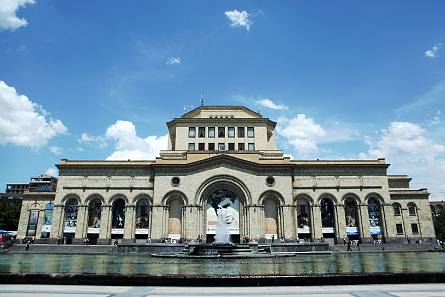 State Museum of History of Armenia
Day 3 - Tour to Garni

Tour to Garni, Geghard and then to Tsaghkadzor.
Visiting the Hellenistic fortress of Garni, which has a different charm in each new season. The Greco-Roman-style temple was build around 77 AD under King Trdat I. This is the only architectural monument saved up to our days from Hellenistic period. The Temple is dedicated to the God of Sun Mher. It collapsed from the earthquake in 1679 and was reconstructed in 1970-s.
Route towards Geghardavank, a supremely beautiful architectural monument built in the 13th century. “Geghard” means a “spear-headed metal object” in Armenian, housed in Geghard, with which Christ was wounded in the side. Now it is saved in the Ejmiatsin treasury.
Trip to wonderful resort-town Tsaghkadzor, founded in 1049, called Darachichak in Persian times. “Tsaghkadzor” means “valley of flowers” in Armenian. Visiting Kecharis, founded early in the 11thc. by Grigor Pahlavuni. Kecharis was considered to be a spiritual and cultural center.
Back to Yerevan. 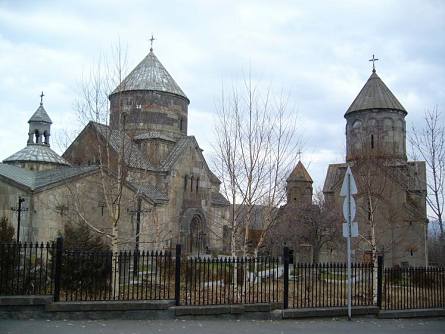 Route towards Ashtarak town. “Ashtarak” means “Tower” in Armenian. It is endowed with many historical, architectural and religious monuments.
Visiting Amberd fortress. Amberd is occupying a rugged promontory between the Amberd River and its main tributary. The fortress reached its zenith as the seat of the Pahlavuni feudal family in the 11th c. Visiting burial site of Mesrop Mashtots at Oshakan. South from Ashtarak is Oshakan, which is most famous as the resting place of the creator of the Armenian alphabet Mesrop Mashtots. The first phrase ever written in Armenian using Mashtots alphabet was the one translated from the Old Testament. Visiting burial site of Mesrop Mashtots at Oshakan.
Back to Yerevan.

Visiting Vanadzor on the way – the administrative center of Lori region.
Visiting Haghpat and Sanahin architectural monuments (10th-13th centuries), truly considered to be the jewels of medieval Armenian architecture preserved by UNESCO and included in the World Heritage list. Both were founded by Queen Khosrovanush around 976. Haghpat and Sanahin were major literary centers in the Middle Ages.
Overnight in Lori.

Visiting Haghartsin (11th c.), one of the most beautiful monuments of medieval architecture. There is an ancient nut tree nearby (said to be 1000 years old), shading a fine viewpoint of various remains of graves with typical Armenian ornaments, including “royal” graves of the Bagratuni family. There is a belief that one can have his dreams come true by passing through a huge hole right in the famous tree.
Trip to famous Lake Sevan (1900m above see level), that enters recorded history with the Urartians. King Rusa I conquered Sevan basin and made it the eastern frontier of the kingdom of Urartu sometime around the 720 BC. A number of boundary markers of Artashes I written in Aramaic, the Middle Eastern lingua franca, show the presence of the Artashesid dynasty in Hellenistic times. In the medieval times, Gegharkunik was dominated by the Dopian clan.
Visiting Sevanavank, a construction, sponsored by Princess Mariam Bagratuni, which is a vivid example of an important religious regional school, under the guidance of the future Armenian Catholikos Mashtots Ervandatsi.
Accommodation in the hotel at Sevan.
Overnight at Sevan.

Monastery Sevanavanq
Day 7 - Tour to the South of Armenia, Jermuk, through Selim Pass

Trip towards Jermuk. On the way visiting Selim Caravan-saray, which lies below the road just before the summit on the South side of Selim Pass, a splendid relic of the days when an international trade route connected Vayots Dzor to the Sevan basin and points of North. It is the best preserved caravan-saray in Armena. Selim is built of basalt blocks, with a cavernous central hall for animals separated from the two vaulted side aisles by rows of stone mangers.
Tour to Jermuk, named for the hot springs (up to 65 C), source of the famous fizzy water. There is a picturesque waterfall, interesting walks and the possibility of a cure of most human ailments at one of many sanatoriums. Visiting the drinking gallery, hiking to the waterfall.
Accommodation in the hotel.
Overnight in Jermuk. 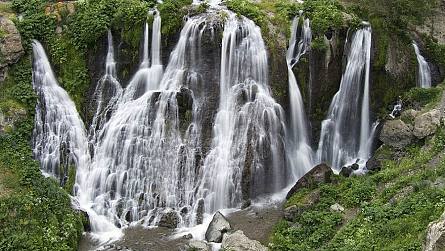 Route towards Sisian from Jermuk.
Visiting Karahunj ancient observatory. It is considered to be 7500 years old, which makes Karahunj more ancient than its British analogy Stonehenge, reckoned 5000 years old.
Route to Tatev from Sisian on mini-buses. Visiting Tatev medieval architectural monument, having a University located on it’s territory. Tatev was considered to be the political and religious centre of Syunik. It was founded in the 9th century, in place of a tabernacle well-known in ancient times. The strategically advantageous location on a cape formed by a deep river gorge with precipitous rocky slopes favoured the construction of a mighty defence complex there.
Visiting Khndzoresk. Excursion into gorge, where you can see the interesting remains of Old Khndzoresk.
Returning to Jermuk.
Overnight in Jermuk. 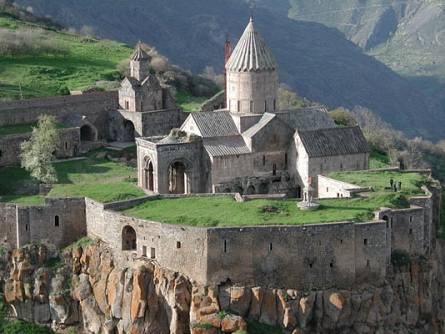 Returning toYerevan. On the way visiting famous Complex of Noravank, situated on a ledge of a deep winding gorge of a tributary of the Arpa River near the village of Amaghu, Yeghegnadzor District. Noravank ensemble stands amidst the bizarre-shaped precipitous red cliffs. Built in place of an ancient cloister, it grew in the reign of Princes Orbelian of Syunik. In the 13th-14th centuries it became a residence of Syunik's bishops and, consequently, a major religious and later cultural center ofArmenia, closely connected with many of the local seats of learning, primarily with Gladzor’s famed university and library.

Visiting Khor Virap. Seeing the historical site of Khor Virap with an over whelming view of Biblical Mount Ararat. There are two deep stone cisterns there, one of which is said to be the pit where Gregory the Illuminator was imprisoned for 13 years by king Trdat III. Arriving inYerevan. 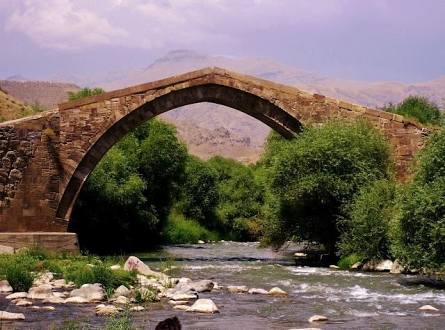 The Memorial Complex of the Sardarapat Battle Heroes was opened in 1968 and is situated 10 km away from Armavir town. This is the site where Armenians won a victory over Turkish aggressors in 1918. The complex includes a big park, a high bell tower and an alley with figures of eagles that leads up to the wall with a triumphal arch. Behind the wall there is the building of the Museum of Ethnography. The exposition of the museum is quite rich. It presents a multitude of materials from many historical and ethnographic regions of Armenia.
Pilgrimage to the first official Christian Church in the world and the seat of the Supreme Patriarch – Catholicos of all Armenians. Excursions to the ancient temple of St. Hripsime. Tour around Ejmiatsin town, visiting the Cathedral – religious centre of all Armenians, and the Cathedral Museum. On the back way observing the ruins of Zvartnots (7th c.). The temple collapsed from the earthquake in the 10th c.
Back to Yerevan.